The system has been created and developed in Australia by professional engineers and is certified by the CSIRO, Warringtonfire, UNSW, UTS for waterproofing and fire rated properties.

In an Australian first, Dincel is offering a void free warranty when you choose to pour your Dincel Structural Walling with Self-Compacting Concrete and the installation is to Dincel’s specifications.

WHERE TO USE DINCEL WALLING

Dincel wall can be finished with various paints, renders and cladding systems. or can be left exposed.

Hardware & General is a prefered partner with Dincel.

H&G can help integrate a DINCEL solution into your project. Upload your plans here for an obligation free quote.

Dincel Structural Walling is the smarter, faster & more economical alternative to conventional formwork and masonry blockwork, particularly in the multi-residential space. Delivering quicker project turnarounds, reduced costs, and cleaner and safer construction sites, Dincel walling erases the need for specialised trades. Dincel’s unique polymer formwork is impervious and does not suck water from the wet concrete, unlike conventional formwork or other porous permanent formwork systems such as fibre cement. The porous nature of other systems can increase the likelihood of honeycombing and air voids that can compromise the structural integrity of the wall and lead to corrosion and concrete degradation issues, which can be expensive to rectify.

Conventional concrete is porous which can lead to corrosion and concrete degradation issues. Concrete cracking is unavoidable, inadequate concrete cover, honeycombing and air voids can lead to concrete cancer. Dincel’s impervious ability minimises the likelihood of these occurring as it provides a protection barrier again the ingress of water and other contaminants into concrete.

No air voids or honeycombing

Dincel’s polymer is impervious and does not suck water from wet concrete. Therefore no friction occurs between the formwork and concrete infill, preventing honeycombing and air voids. 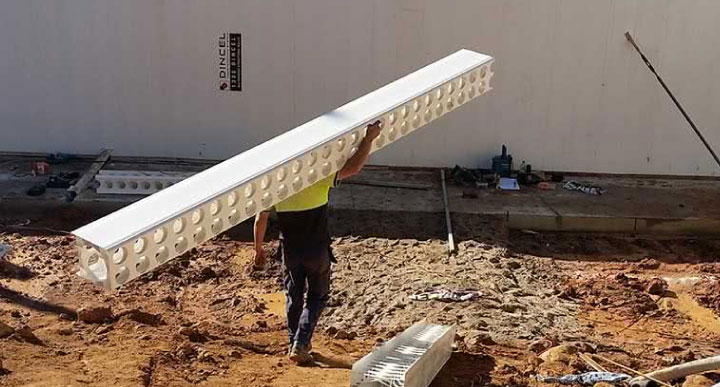 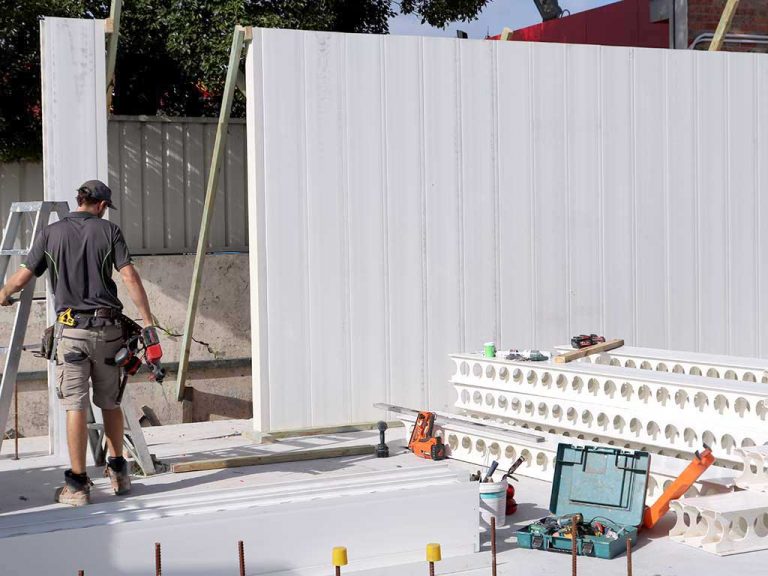 Construction of Dincel Structural Walling is simple. It involves positioning the PVC panels (which are available in custom lengths of 1.8 m – 8 m) vertically where desired; connecting them together via the patented snap-lock joint; introducing steel reinforcement; and carrying out your concrete pour.

Dincel Construction remains at the forefront of innovative building construction techniques by focusing on rigorous testing of Dincel Structural Walling products to meet and exceed industry standards and Building Codes.

Since the Dincel product was developed, our engineers and consultants have continued to work closely with organisations such as the CSIRO, The University of New South Wales, UTS Engineering Workshop and other industry recognised certification authorities for the testing and certification of Dincel products in relation to fire ratings, combustibility, waterproofing, earthquakes, acoustics, toxicity and VOC testing. Dincel products are certified BEP Approved (Best Environmental Practice) on the use of PVC recycled material during manufacturing and end of life management for sustainable buildings in construction.

Dincel has been issued a CodeMark Certificate of Conformity to the 2019 BCA by certification body SAI Global. The certificate verifies that Dincel is compliant with the 2019 BCA for the following: External or internal loadbearing wall applications Walls with joints or penetrations Bush fire prone areas (up to and including BAL-FZ) The CodeMark scheme was developed by the Australian Building Codes Board (ABCB), and as such CodeMark certificates receive mandatory acceptance under State and Territory building control legislation.

Dincel has been issued a BRAC certificate of accreditation which verifies that the product is compliant with the performance requirement CP2 – Spread of fire, and subsequently confirms that Dincel can be used where a non-combustible external wall is required. A BRAC certificate of accreditation is proof by the Building Regulations Advisory Committee that a product meets performance requirements of the BCA. The BRAC is an independent statutory body appointed under Division 4 of Part 12 of the Building Act 1993 – Victoria.

The CodeMark Certificate and BRAC Accreditation was issued following an independent evaluation of various of fire tests and assessments, including (but not limited to) the following large-scale tests:

The Dincel formwork material is comprised of certain additives which enhances fire performance. In the event of a fire, the material safely chars and intumesces (it does not form molten droplets or spread fire). The solid concrete within provides the necessary fire rating. Warringtonfire and CSIRO have confirmed that the polymer webs do not melt away or negatively affect the concrete wall’s performance for FRL.

Dincel was assessed by CSIRO and confirmed as suitable for use in bushfire conditions of up to Flame Zone (FZ), which is the most severe rating.

In Australia, the NCC currently only considers smoke quantity from a fire, not toxicity. Regardless, the Dincel polymer is manufactured without the use of heavy metal stabilisers or plasticisers. Dincel has been tested in accordance with BS 6853:1999 where it was found that the fumes generated by the burning test was well under international toxicity thresholds/limits.

Dincel Structural Walling has been put through an extensive testing and assessment regime with the University of Technology Sydney (UTS) to determine the adequacy of the system in seismic regions. The tests include:


The test results and accompanying analysis confirms the suitability of Dincel system to resist large lateral forces and resulting displacement caused by major ground motions measuring up to 9.0 on the Richter scale. The permanent polymer shell achieves this by working in conjunction with concrete and steel reinforcement to provide ductile composite action to the wall.

Dincel structural walling is a permanent formwork system which when filled with concrete will result in a structurally sound concrete wall. The concrete and steel reinforcement inside can be designed by an engineer to AS 3600, Eurocode or other relevant design codes. For design purposes, the presence of the polymer formwork is removed and the engineer designs with the remaining effective concrete thickness. This is confirmed by certification from the University of New South Wales (UNSW) and the University of Technology Sydney (UTS). Therefore, a structural engineer can design Dincel walls to meet project specific requirements in the same manner as a conventional concrete wall. Structural Engineers are encouraged to download our structural engineering manual for further information. Alternatively, following testing by UTS in accordance with AS3600:2018 Appendix B, it has been verified that Dincel 275 with its unique ring webbing provides significant benefits against a range of structural actions. If desired, Dincel 275 can be designed as a composite walling system in order to substantially reduce or even eliminate steel reinforcement within Dincel 275 walls

Dincel permanent formwork is classed as a low volatile organic compound (VOC) emitting product in accordance with ASTM D5116-97. Test results demonstrated that VOC emissions were less than the recognised threshold as a newly manufactured product and below detection limit 30 days after manufacture.

Tested and certified by CSIRO as meeting waterproofing requirements for FP1.4 and FP1.7 (NCC Volume 1) and P2.4.1 (NCC Volume 2). Dincel panels along with snap-joints when filled with concrete are certified as waterproof for up to 6m head of pressure without the need for waterproofing membranes. The following tests were undertaken by CSIRO to confirm this:

Dincel has been awarded the Best Environmental Practice (BEP) Approval Mark after meeting the strict Green Building Council Best Practice Guidelines for PVC. Dincel was reviewed against the following requirements:


The Dincel polymer PVC is heavy metal stabiliser and plasticiser free. Due to this it is a certified non-toxic product and contains a VOCs significantly below the green star threshold. Additionally, due to Dincel’s innovative design the wall can be designed with less cement content and steel reinforcement than a conventional concrete wall, which reduces the total embodied energy and allows for more efficient end of life recycling.

Dincel has been tested at CSIRO within their reverberation chambers. Based on these test results, Day Design acoustical engineers created assessment reports which details various Dincel walling arrangements and their associated acoustic performance. Therefore, a range of Dincel wall systems are available to suit the various requirements set in the NCC.

All information on this page has been provided by DINCEL. All effort has been taken to ensure information is updated and correct at the time of publishing (2019) however all readers must check the manufacturer’s website ( DINCEL COMPLIANCE) prior to purchase.